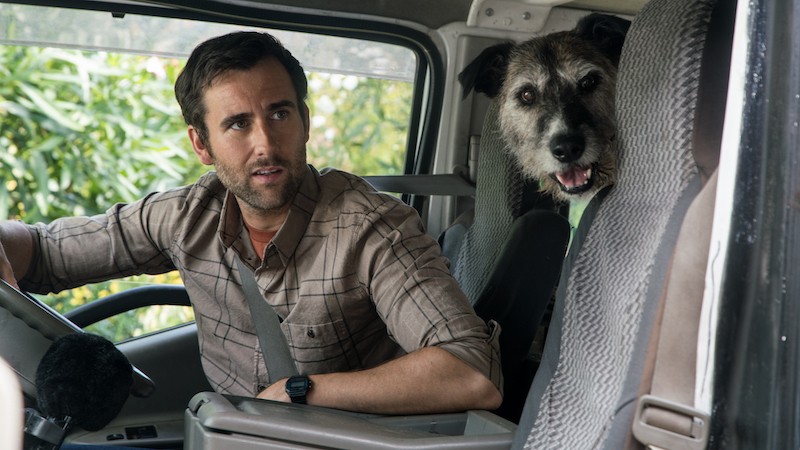 "There are so many movies of an unexpected pregnancy, where the man is being a "typical man" - whatever that is - and is not responsible, is not interested, doesn't know how he's going to come to terms with this, and thinks his life is going to be over, whereas the woman is always completely in love with being pregnant and is so happy, and it's all she's ever wanted. This film completely flips that on its head," reflects Matthew Lewis on his new film 'Baby Done', in which he stars alongside New Zealand's own Rose Matafeo.

The delightfully charming film showcases New Zealand comedy at its finest, with the addition of Lewis playing Tim, a loving boyfriend to his co-star Matafeo's Zoe, in a story which features heartfelt moments alongside complete hilarity.

We spoke with Matthew about filming in New Zealand, his co-stars, his character's empathy, and more...

COUP DE MAIN: I just went to the premiere of 'Baby Done' last night, which was very exciting. I'm sure you were there in spirit, despite not being able to physically be in New Zealand.
MATTHEW LEWIS: Yeah, I'm incredibly jealous. How was it?
CDM: It was so good. There was a funny instance where everyone was too excited to watch the movie and everyone ran into the cinema before the speeches had happened. So we had to leave the cinema and go back out for the speeches. It was the funniest thing I've ever seen happen at a premiere.
MATTHEW: I don't even remember what a cinema looks like. I can't remember what the whole experience is.

CDM: Does it feel strange to be talking about a film and promoting it to New Zealand where we don't have community transmission and we can go to cinemas, when most of the world is not like that? Is that a strange contrast for you to feel?
MATTHEW: Yeah, it's very bizarre actually, to think that there's a place that has done everything so well, that they're able to just go and live completely normally. We're not coming out the other end, but we have very, very few restrictions now, almost inexplicably. So we're sort of getting back to normal, my family are still being very, very careful, as much as we can be. Things like cinemas are still pretty much off the menu for us. So it's bizarre. I'm so thrilled, on the other side of it, we filmed this so long ago, and I'm so thrilled that there is a part of the world that gets to enjoy it - and even more that it's the place that it was birthed from. I'm so glad it's New Zealand that gets to go and see this as it was meant to be seen. 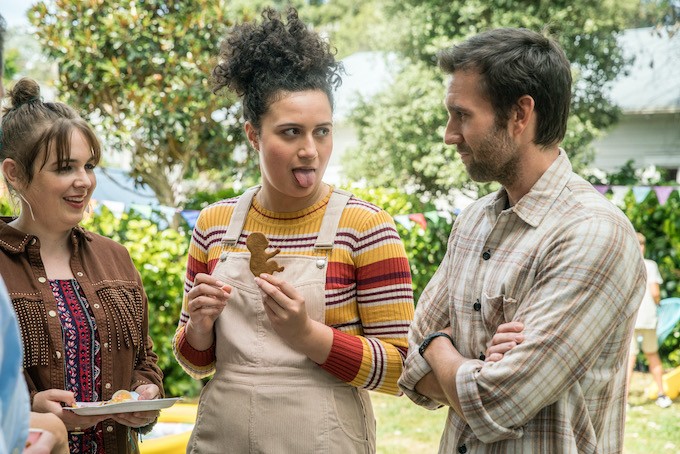 CDM: How long did you spend in New Zealand when you were filming for the movie?
MATTHEW: I think it was about two or three months. Maybe two and a half months, something like that. The turnaround was really quick on it, it was relatively low budget, the schedule was pretty action-packed; we didn't have a lot of downtime. So it was hands-on. But I'm pretty impressed with the movie we managed to make in such a short space of time. It was all hands on deck. But we got there.

CDM: I love the story that Rose Matafeo queued up to meet you at Armageddon years ago. What do you remember from that visit to New Zealand?
MATTHEW: I mean, I remember the visit, of course. I wish I could remember meeting her - unfortunately, I don't, I have to confess. But I've been to New Zealand a couple of times before making this film. I've got family in Auckland, so I've always loved it ever since the first time I went there. Part of the attraction to this project - apart from the script, which obviously was exceptional - was the chance to come down to New Zealand and work there. It's a place I've been trying to get back to whenever I can, if the opportunity presents itself. And yes, that is a true story. Rose did queue up to get a photograph, and she has the evidence. She has a photographic image. She claimed to have burnt it, but it's not true. She still has it! It's pretty special.

CDM: I love how Tim’s character always cries when Zoe cries - it’s like the ultimate sign of empathy, which I always think is one of the most important qualities for someone to have. What are Tim’s other key qualities in your opinion?
MATTHEW: Tim is such an incredibly... empathetic is exactly what he is, but he's so incredibly caring, and in-tune with the people around him, and he so wants to do the right thing. He is someone who could have easily gone off the rails, he didn't have a Dad of his own, or at least he has no relationship with his dad. He could have very easily turned that into a degree of resentment, and gone the complete opposite direction as a father. But instead, he's determined not to have that happen, he's determined that his son will have a father, and he'll have the best father he could possibly have. I think, truthfully, he does get a bit lost about Zoe's feelings because he's so distracted by being the best that he can be for the baby. But it was never a deliberate thing, and when it occurs to him how Zoe's feeling, and what he's been missing this whole time, and what she's needed this whole time, he is right there, ready to make up for it. I just think he's such a good person. He's a bit of a nerd, but I love him for that. He's just a good person that wants the best for the people around him. I love how frustrated he gets with Zoe when she's not doing the right thing. But at the end of the day, he's still madly in love with her. Even when it doesn't quite go to plan and they hit a rough patch, you can see that it hurts him as much as it hurts her and they are meant for each other. 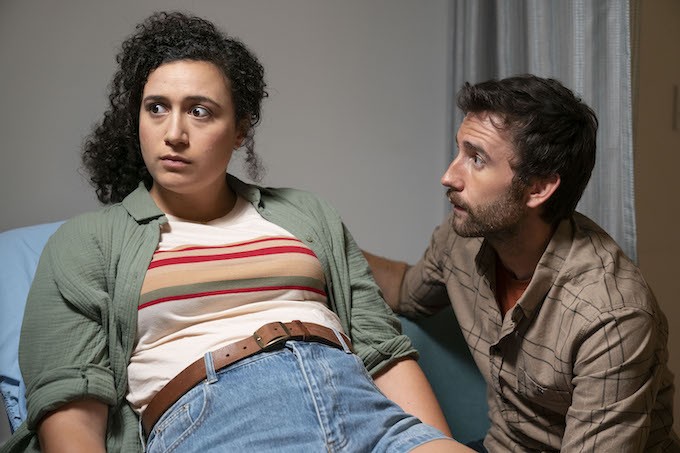 CDM: Pop culture always tends to segment people's lives into clear, defined chapters - i.e. going to university, getting a job, getting married, having a baby - but I liked how the end of the film highlighted that life doesn’t need to end once you become a parent, and that adventure and living your life is still possible. Was it important for you to be a part of a story where those chapters weren’t so defined?
MATTHEW: Absolutely. I think that this movie / this script flies in the face of convention, with regard to several things. One of the main things that attracted me to it was the gender reversal that Sophie came up with. There are so many movies of an unexpected pregnancy where the man is being a "typical man" - whatever that is - and is not responsible, is not interested, doesn't know how he's going to come to terms with this, and thinks his life is going to be over, whereas the woman is always completely in love with being pregnant and is so happy, and it's all she's ever wanted. This film completely flips that on its head. In this movie, it's Tim that is so desperate to be a father, he is the one that is going to the prenatal classes and trying to learn as much as he can. It's Zoe, the mother, who is not prepared, she has so many things she wants to do - she wants to win the tree climbing competitions and do these physical activities. She's worried and frustrated that her body is going to change and not allow her to do that. I just thought that was really interesting. I know that this story is semi-autobiographical, and I discussed it at great length with Curtis [Vowell], our director, and Sophie [Henderson], our writer - it's almost about their life and how they had a sort of unexpected pregnancy. But there they are, they've got two little girls who are very young, and here they are making a film. It just goes to show exactly what you said, that you're not pigeonholed into these moments or defined chapters of your life. You can have children, and still go and be a successful filmmaker and have your children on set. You don't just have a baby and become a mum; game over, you are now a mum. There is so much more, as well as motherhood and fatherhood, that you can still do. Not only does the film highlight that, but also it's a testament to Curtis and Sophie themselves.

CDM: You shared in an Instagram post that you are the “least good person involved” in the film. Are there any particular great moments from filming with your castmates that you can recall?
MATTHEW: I stand by that statement. At the end of the day, we were making a comedy film and the vast majority of the cast are professional comedians and stand-up comedians. I went to go see a bunch of them on-stage when I was in Auckland. There were a couple of scenes with the prenatal classes, where there were probably about five or six stand-up comedians in the room at the time. Curtis was very keen to have some fun, and he was quite keen with improvisation. He was like, "Let's get done what's on the page. When we've got that down, we can have some fun with it." I very quickly said, "You know what, I'm not even going to try and be funny because these guys are professionals. I'm going to do what's on the page." Thankfully, the script was funny enough as it was, but I felt very out of my depth in all of those moments. Comedians are always trying to outdo each other all the time - a lot of ego in some of those rooms and a lot of talent as well. The jokes were coming thick and fast, and I  don't know how many make it into the final movie. It was brilliant. As an actor, my perspective on it was, 'All I can do is try and react as Tim. That's where the humour will come. I have no idea what these people are going to say. I just have to react like Tim and that's the challenge that I enjoy.' I know I can't keep up with them in the humour front, but I enjoyed that challenge of trying to stay as Tim throughout. There were certainly a few times that I slipped - there's a lot of laughter going on in a lot of scenes. Some of the funniest things were probably impossible to use because we all just started laughing, unfortunately.

'Baby Done' is out in New Zealand cinemas now - watch the trailer below: 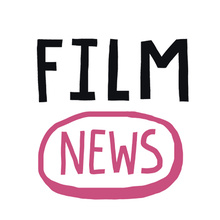 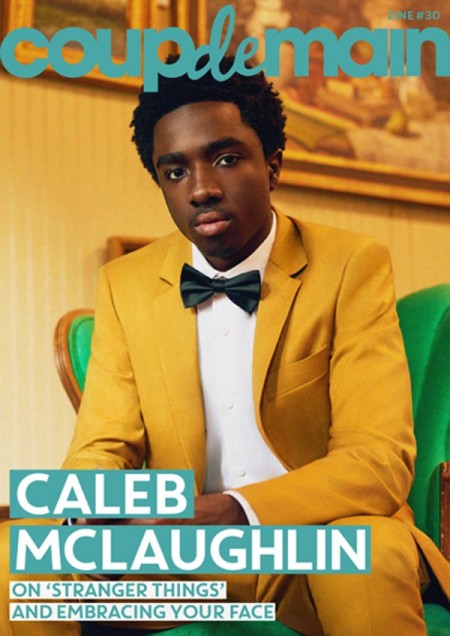